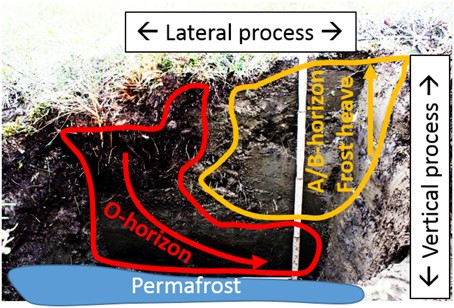 High-latitude perennially frozen ground stores about as much carbon (C) as the entire atmosphere, from which more than a half is stored in turbels, a main permafrost soil type. Turbels are characterized by specific soil movements due to freezing and thawing cycles that are collectively referred to as cryoturbation (gr. kryos = frost). Cryoturbation effectively transfers topsoil organic rich horizons (O-horizon, see figure) to the subsoil where it can be stored for long periods, leading to those major C stocks. While the importance of cryoturbation within the high-latitude C cycle is known, a detailed quantitative understanding of the dynamics of the underlying processes is still lacking, but necessary to predict if, where and to what extent cryoturbation and resulting soil displacement may be affected by rising temperatures due to climate change.

To overcome this knowledge gap, this project aims to develop a two-dimensional geophysical soil model at pedon scale including vertical and lateral soil movements. The geophysical model will already allow us to explore the effect of soil heterogeneity on physical soil properties, such as temperature and moisture. By allowing soil movement due to freezing and thawing cycles, and excess ice dynamics, we will be able to study evolving feedbacks between initial soil heterogeneity and soil development that lead to pattern ground, e.g. the formation of non-sorted cycles, in detail, and trace the observed transfer of organic matter from the topsoil to the subsoil.

Employees at the Institute of Soil Science